Along with the publishing of the first policy brief within the “The Flip Side of the Bosnian Unemployment Coin” project, Populari organized a panel discussion, titled “Youth Unemployment: Do you have an attitude issue?,” which was held on Wednesday, 11 December 2013 in Hotel Europe in Sarajevo.

The panel brought together representatives of governmental unemployment bureaus, private employment agencies, non-governmental and youth organizations, as well as many students and youngsters. It resulted in successfully opening and stimulating the discussion on the aspect of youth unemployment in BiH that often remains ignored, namely the approach of highly educated young people to the labor market in Bosnia and Herzegovina and their attitudes when looking for a job.

They exchanged their opinions with the audience that was very actively involved in the discussion. Starting the debate, Nermana Ajanović stressed that young people do not feel pressure to find a job because mostlytheir basic living expenses are covered by their parents.  Speaking from her own experience as an intermediary between employers and job seekers, she asserted that bh. youth have expectations that are too high and unrealistic, but at the same time, she set out the question what the possible causes of such attitude are.

Following up on her question, Belma Hadžimahmutović returned to the war in 90s claiming that the donation system destroyed proactive attempts of people in BiH to progress, which in turn also left a strong impact on the self-confidence of young people today. “Did a genuine working culture in BiH ever exist?”, was the open question posed by Adis Arapović. Hewas also of opinion that young people agree to a minimum of wishes, dreams, ambitions, which is not surprising given the questionable role models that exist in our society. And Haris Huskić agreed with this statement, adding that the youth inertia is their reaction to the entire society.

On the other hand, based on her own job searching experience, Marijana Ćup, an economist from Banja Luka, emphasized that the problem also lies in the attitude of employers that mostly do not reply to job applications – not even by automatic email. The audience also pointed out the importance of finding what the causes for such negative attitudes of young people are, as it is only on this basis that we will in the future be able to find solutions.

The excellent turnout at the panel and the presence of more than ten media outlets indicate that there is a great need for public debates on this and related topics. The fervor of the discussion continued also after the official part of the panel concluded and the participants gathered informally for refreshments.

More details on the event can be downloaded below:

Agenda: PopulariPanel “YOUTH UNEMPLOYMENT: Do You Have an Attitude Issue?” (.pdf) >>>

Video: of the PopulariPanel: Youth Unemployment: Do You Have an Attitude Issue? (Vimeo) >>> 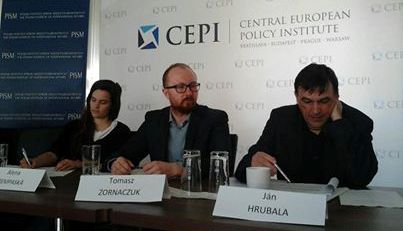 Workshop: Visegrad for Strengthening Democracy in the Western Balkans: Slovakia’s Experience with Cooperation between Civil Society and Public Administration